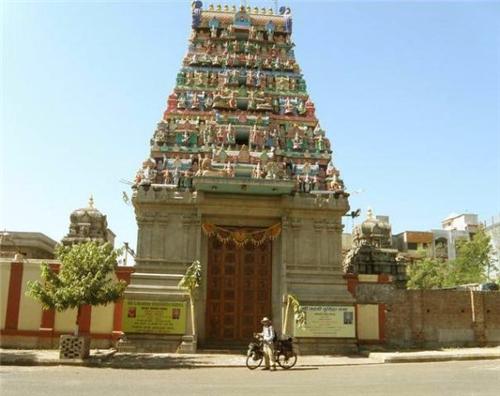 Bhiwandi is a suburban city on the fringes of Mumbai metropolis. Life in the city revolves around the textile manufacturing business that sprung up with the advent of the power loom. Over one million people call the city their home.

The city has several big and small places of interest. These landmarks encompass numerous genres; from places of worship to swanky malls. The Balaji temple in Bhiwandi is a famous spiritual spot. The temple was established by a devout couple who were believed to be blessed at the shrine of the Balaji Temple in Tirupati. The founder of the temple, Shri Dawat Narsaiah and his wife had twice observed heavenly interception. The first was when Smt. Dawat Laksmibai gave birth to a son against all odds. The second time was when their son was able to speak after 4 years. Both the events occurred after the couple paid a visit to the shrine of Shri Venkateswara at Tirupati.

As a sign of respect and paying homage to the Lord, the couple built a shrine with a deity of the Lord. This evolved to be a famous temple of the region. This shrine has seen increasing crowd of devotees in recent years, an affirmation of the belief in the temple. The architecture imitates the one at Tirupati bearing Dravidian style dome and carvings.

The Balaji Temple at Padma Nagar, Bhiwandi is at a convenient location for travelers. The nearest major landmark is the Varaladevi Talao. It is easily accessible via roadways and railways. Balaji Road station is a small railway station within a walking distance from the temple. Local trains halt at the station. For travelers from far off places, the Bhiwandi Railway Station presents a more suitable alternative as it is connected to major railway stations.

If you are travelling by road, the temple is located at a short distance from the NH 3 connecting Mumbai and Nashik. Take a left turn through the State Highway Number 76, if you are coming from Bombay. The nearest airport is the Chatrapati Shivaji International airport at Mumbai. It lies at a distance of 60 kilometers from Bhiwandi.

Being close to the sea, Bhiwandi enjoys a moderate temperature throughout the year. In the summer months, temperatures during the day can soar. However, the nights are cooler. The city receives ample amounts of rainfall during the monsoon season owing to the South Western Winds from the Indian Ocean. The ideal time to visit the temple would be from November to March. During this time, the scorching heat of the sun is absent and evenings are cool with pleasant winds. For a couple of weeks in December or January, the nights can get really cold.

What to Expect from the Visit:
A visit to the temple may invoke a sort of spiritual awakening for you and your family. Shri Venkateswara Swami Devastanam is ideal for a day off from your hectic everyday life even for believers of other faith.

Regular offerings and worships are made to the deity installed at the main chamber of the temple. The premise has a small artifact store that sells memorabilia and books about the Lord.

A visit to the temple can be expected to be a memorable one. With calm surroundings and religious hymns that reverberate through the air, the temple can soothe one’s mind. You must definitely make a point to visit the temple if you are in Bhiwandi.

Explore more about Tourism in Bhiwandi